So one of my traders has been taking bigger risks than I'm comfortable with, and most of this update's about that really...

It's Citadelpoint. That's right - the superstar of my portfolio who's been raking in the profits hand over fist. He's lost around a third of all the profit's he's made me in one day.

It basically comes down to one specific trade he's made. It's a forex trade - Buy AUD/USD. What does that mean? It means he thinks that the Australian Dollar (AUD) will strengthen against the U.S Dollar (USD). It hasn't though. 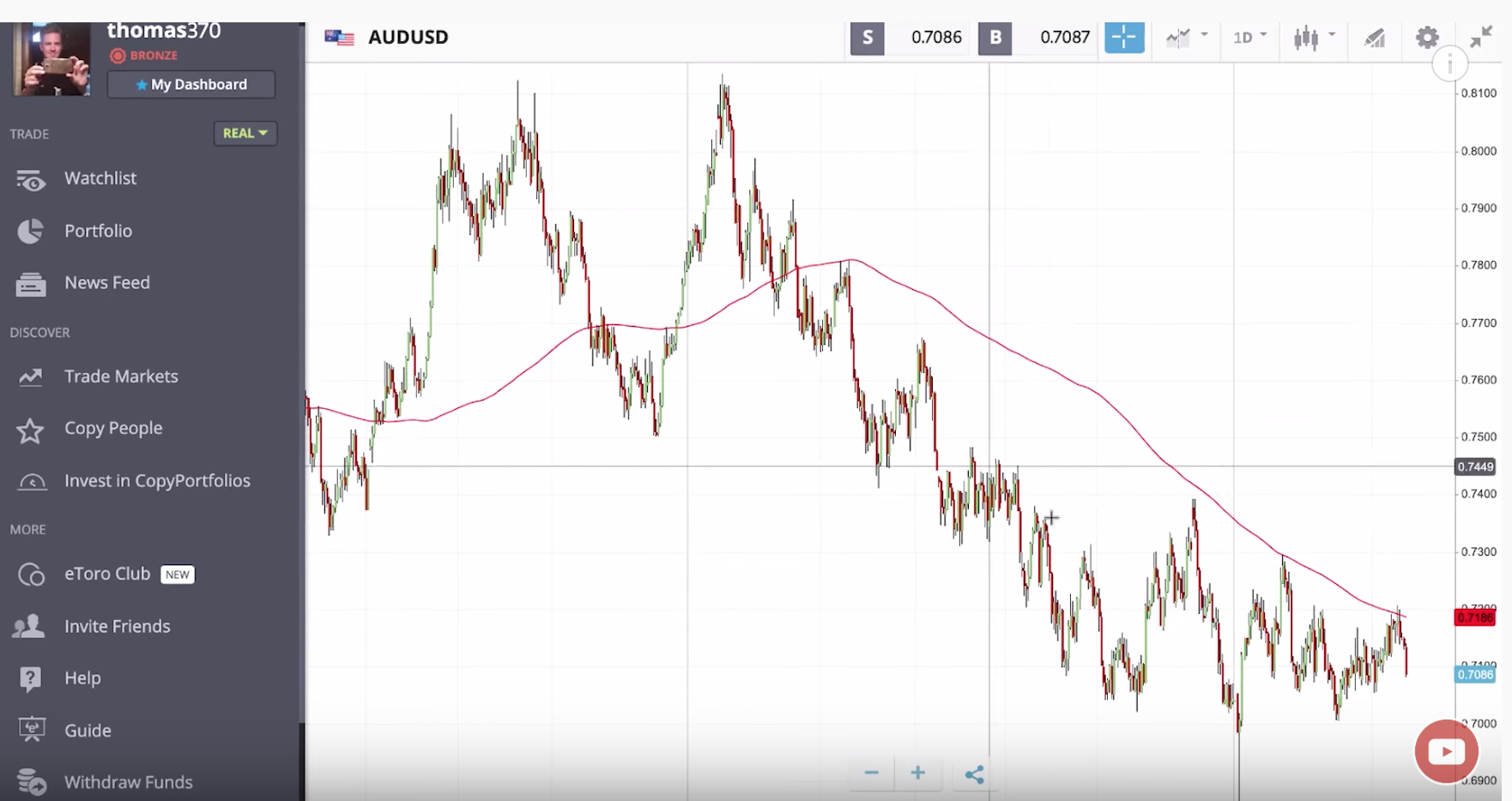 It's been falling, and falling fast. The problem is that he didn't just open 'any old trade'. He used nearly all of the money he had in his account on this one single trade. And then he made another small trade on the same forex pair... So now, he is using 100% of the money that I have invested with him on this one trade. And it's going against him fast.

So what do I do now?

That's a really good question, and one I've been trying to answer. As soon as I saw the trade opened I thought "Uh oh... Maybe I should close this one." But I didn't. I wish I had now, but I left it open.

"No." I thought "I don't want to just micro-manage his trading - I have to be able to trust him or this won't be passive at all."

Now, that's all true - what's the point in copy trading if you're still having to constantly watch? But on the other hand, maybe he just hasbn't different goals to me. Maybe keeping low risk doesn't really matter to him. Maybe he'd rather bet big and win big...

Uh oh... Then he actually posted about this exact trade on his feed. He knew some of us copiers might be panicing so he laid out his reasons for everyone to see. He's a clever chap, and his reasons seem sound, but he also made it clear he'll stick with the trade for now. 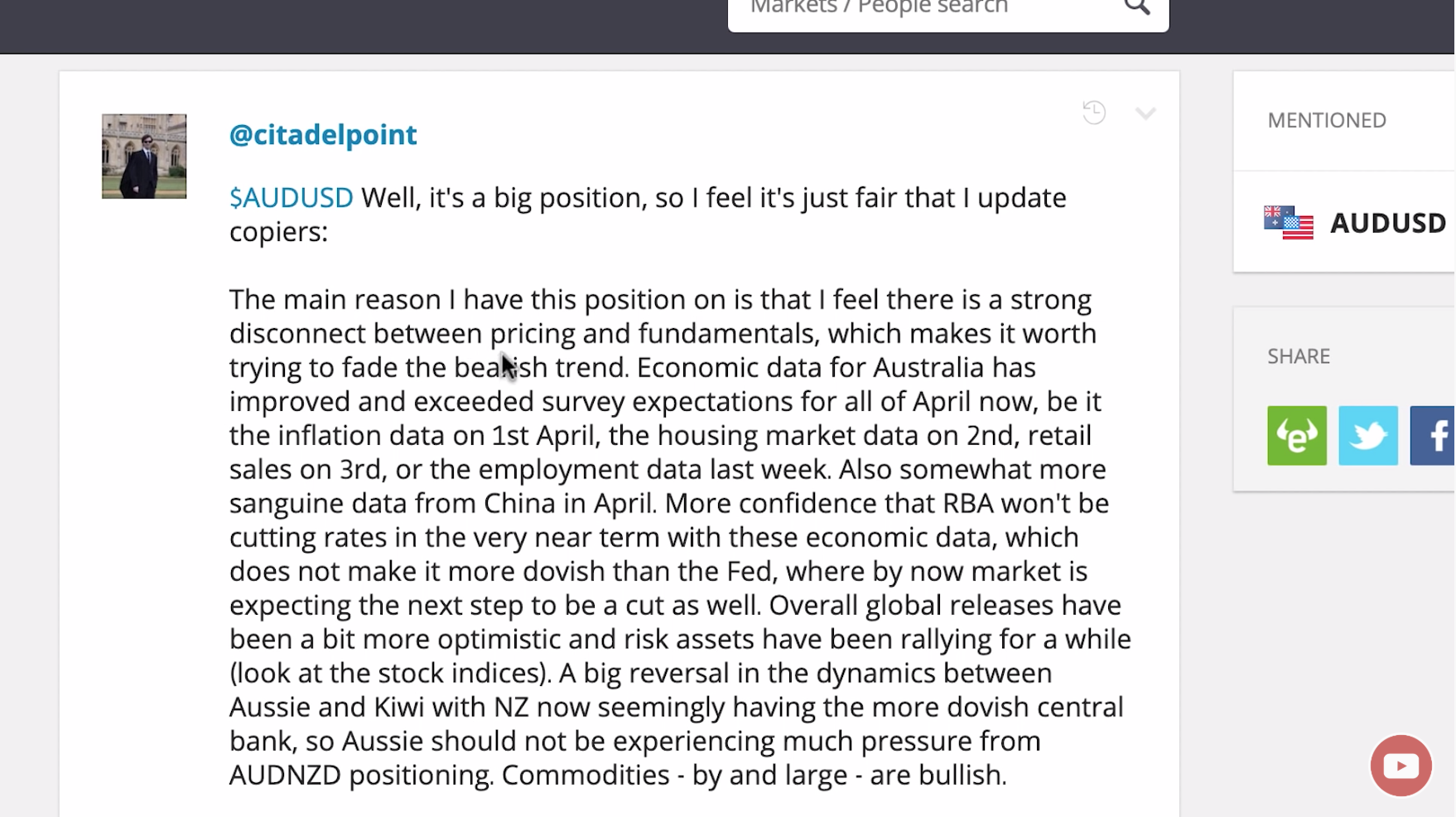 He pointed out that he is willing to lose the same amount again before closing it (as far as I understood).

Will it trigger my Copy Stop Loss?

That's my concern. I've set a tight Copy Stop Loss on all of the people I'm copying in my portfolio. Basically, my copy stop loss tells eToro "If they ever lose this much money, stop the copy automatically". I've set that CSL at 15% for all of my traders. So, if he drops 15% from his all time high (the highest profit he's ever made me), it will trigger. If it triggers, the copy will be stopped automatically, and I won't be able to copy him again.

Why won't I be able to copy him again?

Citadelpoint is not part of the "Popular Investor Program" on eToro. That's when people are approved by Etoro... They're following eToro's rules, and are elligible to be copied by others and make money from it.

Citadelpoint doesn't want to be part of this program. He's said so explicitly as his current employer won't allow it. If you're no on the Popular Investor Program, a small amount of people CAN still copy you.

But it's a very small amount - twenty or thirty or so. And there are a LOT of people who currently want to copy him. So, if my Copy Stop Loss triggers, and I stop copying him, someone else will take my spot, and I'll be unable to get back in ...

So what's the plan now?

I've been aware that Citadelpoint is riskier than the others in my portfolio for a while. It's why I'm currently copying him with around 11% of my portfolio rather than the 24% that Berrau or Olivier Danvel are being copied with. 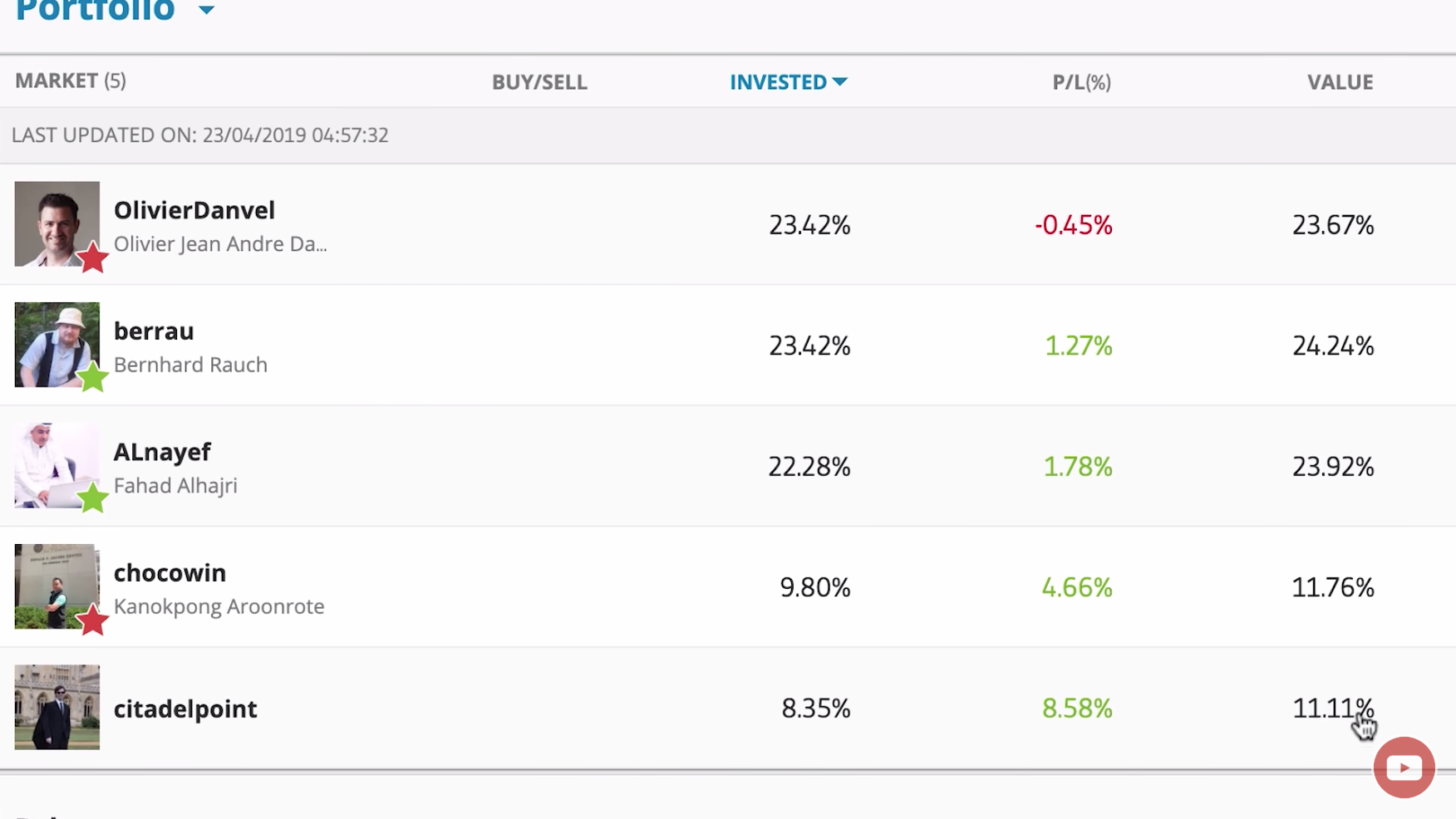 It's been something I've been concerned about for a while. But, having said that, it's also been Citadelpoint making the lion's share of profits for me. He's been trading like a champion - like a machine. But I've thought for sometime that if I want to keep a really safe portfolio, I need to reduce his allocation.

I think that if he was at about 5% of my total portfolio size, it would be a fair risk/reward scenario. I'd need to put more money into my account to do that though. And I just don't have the money to add right now, so 11% is about as low as I can go...

Remember - the minimum I can copy any trader with is $200. So I would need to add enough money to my account that $200 is 5% of it. That's more money than I currently have - and it's messing with my risk profile.

The future of this forex trade

I've done a little technical analysis, and I can see the support levels just below where it currently is. As long as it stays above them, I won't panic too much more. But if it falls through those support levels (previous lows) then I could potentially be in for much greater losses, and possibly the CSL being triggered. We'll see what happens.

I really don't want to lose him from the portfolio. But I won't change my Copy Stop Loss to make that happen. I've done that before - lowered my stop loss further and further on a losing trade. It didn't work then, and I wished I'd just taken the smaller losses earlier on.

So that's what I'll do now - if he triggers my Copy Stop Loss, then so be it. It'll be a great shame, as I think he's very talented, but I'll accept it and move on.

How are the other traders doing?

Honestly, I've been in such panic about the situation with Citadelpoint that I've largely been ignoring the relatively minor ups and downs of the others. They're doing fine. Olivier Danvel currently has a few trades moving against him, and he's currently down 0.5% for the month.

I would be worried about that, but the Citadelpoint situation is really making them seem pretty inconsequential. I believe Olivier will make it back, and there's still another week left in April, so I'm not too worried about that at all.

Berrau is slightly in profit, with a small Ripple crypto trade losing slightly, but not serious.

Chocowin is roughly where he was in the last update, and the same goes for Alnayef. 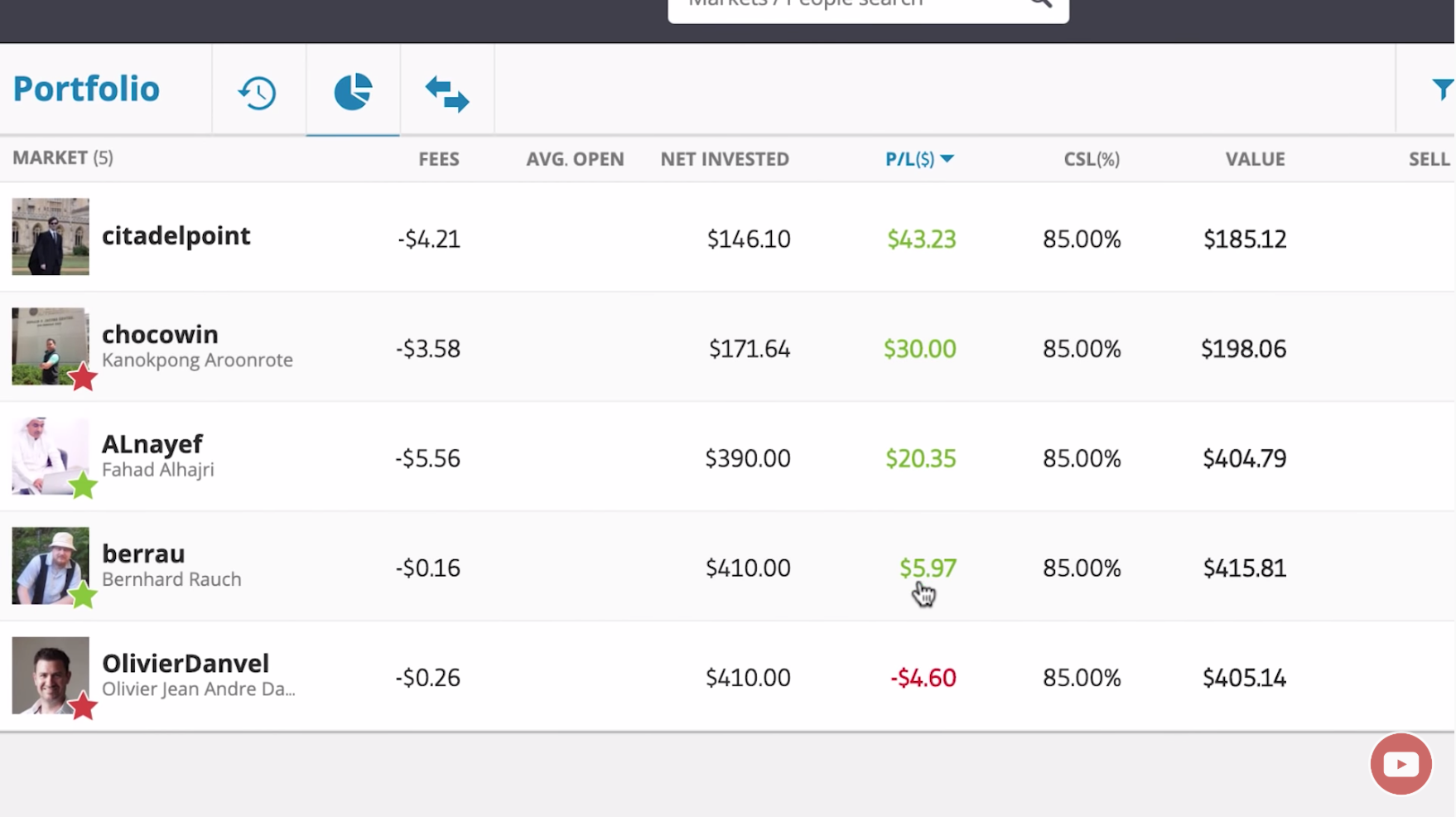 Alnayef is also trading AUD/USD but his position size is so small and barely leveraged, so the big movement has hardly made a dent in my copy of him...

It's all eyes on that AUD/USD trade for now - if it drops any further, I may see that stop loss triggered and lose my star player. We'll wait and see!